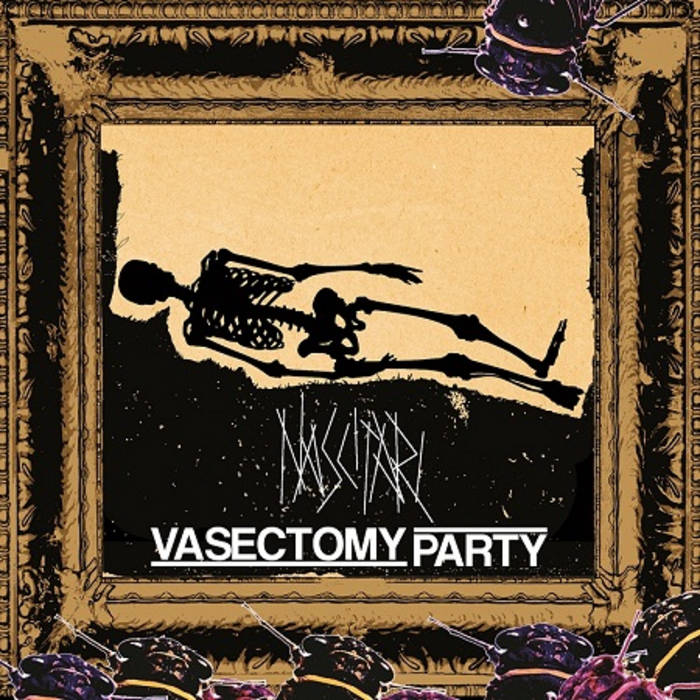 This collaboration highlights two very different approaches to the HNW genre. Nascitari's side focuses on low end sounds, crackles, and dark pummelings. Vasectomy Party's side is a white static driven noise wall inspired by the mating sounds of cicadas.

*note: lathes by nature have slight imperfections, such as pops, surface noise, and occasional skipping. All lathes have been tested for playability, however imperfections are the inherent in the format.

Lathe is SOLD OUT!

Another blazing split between Nascitari and another harsh noise artist that's appearing on this week's new arrivals list, this one with the newer HN outfit Vasectomy Party. Brutal stuff comes gushing out of both.
Nascitari's untitled track is another wall of black static, this one carved out of the same charred matter as those of The Rita: chunks of murky mid-range static collapsing in slow-motion, an avalanche of muffled crackling and rumbling, like the sound of a distant rockslide being transmitted via shortwave radio. Its quite intoxicating, an endless thunderblast rippling across empty skies and stretched out into a lock-groove loop, flecked with volcanic ash and spurts of black flame. Another fine sonic meditation on destruction / disintegration / dissolution from this newer Italian HNW artist.
Also sculpting from static but creating something much more abrasive, Florida's Vasectomy Party spurts out a squiggling, seething mass of juddering distortion and hiss for "March Of The Cicadas". You don't even need to see the title for this to summon images of skies blotted out by endless black swarms of insects, a vast rustling, crackling din making up the entire track. Compared to the previous track from Nascitari, this is pretty unsettling; there's a suffocating feel to this wall of static.
The Cdr version of the split also includes a second track from Vasectomy Party, an eleven minute wall of static/crunch that is more subdued and immersive than the previous piece. Blending waves of granular black hiss and crunchy, boiling distortion, this spreads out into a multi-layered field of shortwave oblivion. Doubtless what it would sound like if someone created noise walls using a malfunctioning Atari 2600 as the sound engine.
Comes in a 7" size full color sleeve identical to the lathe cut vinyl release, and is limited to a mere fifteen copies.