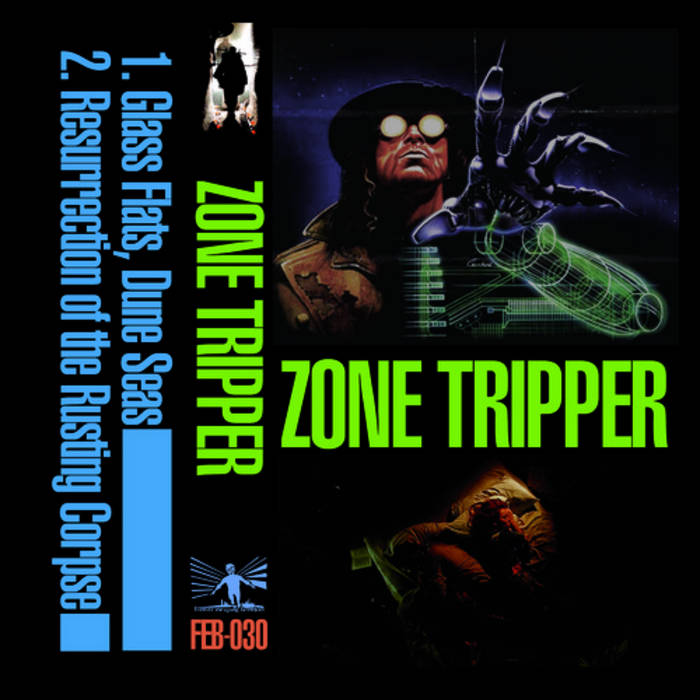 Soundscapes to barren wastelands, a civilation in decline and a draconian police state killing civillians in the name of "population control".

I was 15 in 1990. I went to the Alderwood Mall one saturday afternoon and wondered to the movie theater in search of something appropriate for a 15 year old. I saw the poster for Hardware and bought my ticket. I haven't seen Hardware since that day in 1990 but I remember a few things about it—there was Iggy Pop, fighting the extermination robot and something about a poison that smells like apple pie. The most important thing for me was that after the movie I ran to the record store and decided that I needed something that sounded like how that movie made me feel. I wasn't sure what to pick up but I settled on Arise by Sepultura. I was not disappointed. Zone Tripper, the noise trio, seems to have wanted the same thing but they decided to make their own Arise. It's a brutal, brutal assault of noise and samples. Samples used in a way that I can get behind, sparingly. The layout itself looks like it was done in 1990. In that I would say that it's not very attractive but it's very fitting. Definitely worth it for the time travel.
devdformats.blogspot.com/2013/08/zone-tripper-cs.html

Zone Tripper is an American harsh noise band, featuring members of other nicely named projects like Vasectomy Party or Rectal Hygienics.
This self titled tape released by Forever Escaping Boredom is the first material of theirs I happen to listen to and I must say I'm positively impressed. Their music is a solid and interesting mix of pure harsh noise and power electronics with the welcome addition of bizarre sci-fi undertones, so it's right up my alley.

Both of the compositions featured on the tape, "Glass Flats, Dune Seas" and "Resurrection Of The Rusting Corpse", show a vast array of harsh noise crunches, sputters, feedbacks, hisses and crackles, classic American p.e. synth pulses and distorted vocals, topped by funny/bleak samples from post-apocalyptic sci-fi movies. Definitely a good soundtrack for a warped and stupid nuclear fallout. All the elements blend together really well and Zone Tripper manage to sound like a proper "band". I'm not sure if this material is taken from actual band sessions or if Zone Tripper is just a mail collaboration (members come from Florida, Chicago and Philadelphia so this could be the most logic process), but either way I think this is quite an accomplishment that's not so easily obtained in this reviled genre of music.

The cheesy sci-fi VHS feeling of the artwork put me off at first but it works pretty well, it's coherent with the contents of the tape and at least sets Zone Tripper apart from the masses.

In conclusion I sincerely recommend this C32 tape to all lovers of good American harsh noise - it's a product of love and skill.
www.musiquemachine.com/reviews/reviews_template.php?id=4352

First of all, I must admit, my ears hurt so bad, cuz I forgot to decrease levels of my headphones. Despite that, Zonetripper is one of the best releases I had privilege to hear and review this year. I heard the tracks on the Forever Escaping Boredom bandcamp page and was so desparate to get it for a review. Seriously, these guys know what they are doing and they are doing their job pretty good. You can hear loads of good old harsh noise wall in the background while the junk metal stabs, fuzzy guitar manipulations, wierd drones, screaming harsh noise parts and movie sequences are getting through the tracks all the time. Even the song titles are amazing. You can pick your personal best between ”Glass Flats, Dune Seas” and ”Resurrection Of The Rusting Corpse”. This material will instantly kill your ears and you will simply love it.

Zonetripper comes with full coloured j-card packed in standard plastic tape case. Front cover illustration is brilliant and it reminds me on science fiction movies from the ’80s. You can find all the informations about band members and contacts on the back side of the cover artwork. Highly recommended stuff if you hate your neighbours. Play it loud!!!