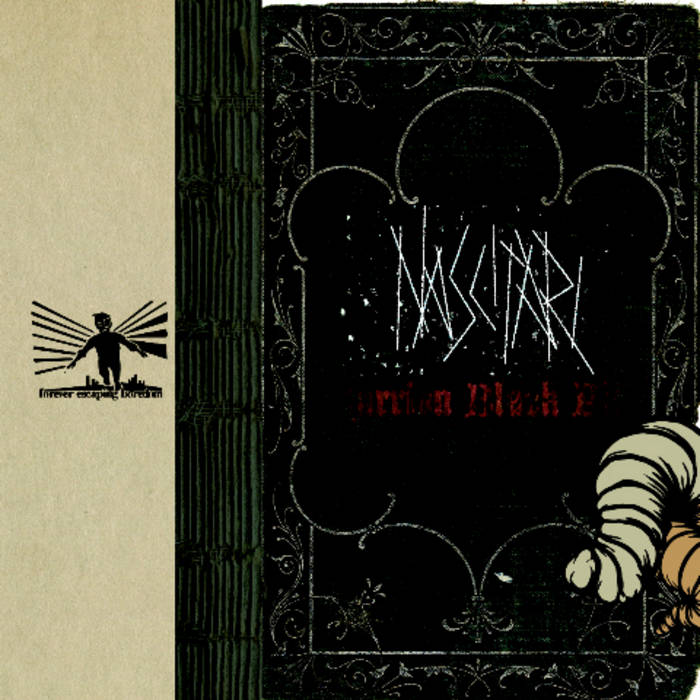 It writhes!- it writhes!- with mortal pangs
The mimes become its food,
And seraphs sob at vermin fangs
In human gore imbued.

Out- out are the lights- out all!
And, over each quivering form,
The curtain, a funeral pall,
Comes down with the rush of a storm,
While the angels, all pallid and wan,
Uprising, unveiling, affirm
That the play is the tragedy, “Man,”
And its hero the Conqueror Worm.

Also of note is this lively little split tape between Nascitari (Claustrophobia head Lorenzo's own project) and Brazil's Carrion Black Pit, which comes courtesy of noise juggernaut Forever Escaping Boredom. The inspiration here is Edgar Allen Poe's poem of the same name, which reps the sort of nasty morbid stuff any noisester worth his (or her) weight in contact mics is more or less obligated to worship. CBP's side starts off with the dessicated score to some long-lost horror-film, flayed vocals bleeding into the void, before sending things off into a dense mass of Earth's-mantle-layer growl. It slowly grinds you down over the side's duration. On the flip comes Nascitari's own creation, which begins with an excerpt from a ubiquitous orchestral score before abruptly curtsying off a precipice into truly hateful noise. Here the gloves come off. The sound is mean and bristly, though almost wafer-thin: Nascitari's noise skips sub-bass for a grim middle-range that resonates through the bowels and stays crudely in-the-red. It's the meanest rattle of them all. (MT)

Brazilian HNW project Carrion Black Pit offers a new slant on the harsh noise wall aesthetic by introducing passages of bizarre, amoebic noise into its sprawling rumblescapes. When it's fully cranked, CBP unleashes a wave of crushing mid-range crackle and rumble that reminds me of the murky, highly textured noise-walls found on early releases from The Rita. But then you'll also find these stretches of warped burbling noise that resembles the sound of a primordial black swamp, full of weird guttural drones and monstrous gurgles, which serve to evoke visions of foul otherworldly organisms influenced by Lovecraft's literary visions of vast cosmic dread and monstrous appetites. Pretty cool.

Italy's Nascitari also steers from the norm by incorporating familiar orchestral music as intros for its brutal static walls, but once that wall kicks in, it is relentless and suffocating and unending. This muted maelstrom of mid-range rumble is reminiscent of Vomir's work and isn't as distinct as the preceding side, but it's still a solid blast of black-static inferno, hypnotic and obliterating as it swirls around, flecked with specks of blown-speaker rattle.
Total collapse. Total nullification.