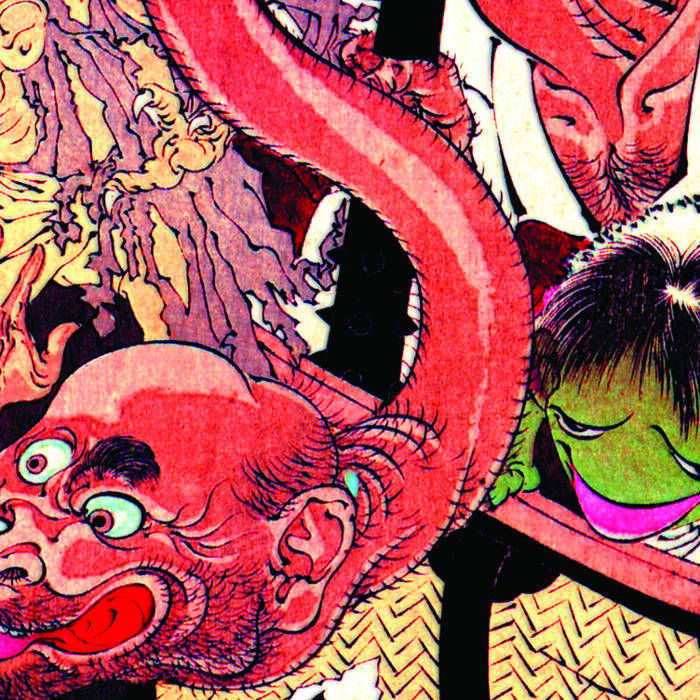 Belgium based Crucifix Eye are a digital HNW project that create a dense ‘n’ swirling take on walled noise. The project’s been in existence since mid-2012, puting out seven or so mostly tape based releases. “Yokai” comes in the form of a c40, & features two side long tracks.
The release is themed around Japanese folklore, and the bright full colour tape sleeve features some comic like artwork that takes in a multi-eyed red & hairy faced serpent making it’s way through a rather deranged oriental landscape. The tape it’s self also features full colour labels too, which taking in more surreal comic book oriental like artwork.

Yokai is the name for a class of supernatural monster in Japanese folklore- they ranged from the malevolent to the mischievous, and they are often shape-shifting entities too, which rather nicely fits with the dense yet subtle shifting ‘walls’ on offer on this tape.

Side one is taken up by the track “Oni”, which starts out with a very brutal mixture of juddering ‘n’ billowing noise. As the ‘wall’ progresses Crucifix Eye subtle adds in more layers of tone, that sometimes stay around for a bit, but at other times are quite fleeting- these take in: eerier ‘n’ slow almost harmonic pitch accelerations, often off pattern juddering ‘n’ pummelling tones, rushing static like bumbling ‘n’ boiling textures, onto throbbing drone judders, etc . The ‘wall’ remains very dense & overloading through out, with the juddering ‘n’ billowing textures of the beginning staying fairly constant under the slow shift of the sub-tones. I must say I rather enjoy the clamouring overloaded yet shifting vibe of this track, and the pitch accelerations really add a ominous atmospheric edge to the proceedings.

Side two's track in entitled “Tsuchigumo”, and this goes for a more stripped & atmospheric take on wall-making. I wouldn’t say it was ANW, as the textures never drift or thin right out, but the vibe here is certainty thinner & more moody. The ‘walls’ built around a muffled & buried mixture of juddering ‘n’ crackling electro texturing, looped church bell like tonality, repetitive ritual grating like subtones & eerier billows. Once again there is some subtle textural shift & movement here, but it’s done in a much less noticeable & atmospheric way. And once again the ‘wall’ retains a few fixed & constant tone repetitions too.

I must say on the whole I was rather taken by this tape- firstly both tracks here have a fairly original take on ‘wall-making’, and each of the tracks has a nice atmospheric/ eerier underbelly. Secondly the bright pro printed cover adds a nice surreal edge to the proceedings that you don’t often see with HNW releases. I’ll certainly be on the look out for future releases from this project
3/5 Gears
www.musiquemachine.com/reviews/reviews_template.php?id=4155

Crucifix Eye is harsh noise wall done by databending, but it’s not very apparent from Yokai. The two tracks on this cassette sound made from analog electronics, not digitally altered, and there are nuances in these pieces that have obviously been examined and studied by the artist.

The first track, “Oni,” is a side-long mass of juddering sound. There’s a lot of pulsating bass, and it’s working at uneven tempos to add to the culmination. There’s also a ton of crunch, but the way that the bass doesn’t evenly fit with it creates a raucous accompaniment. The wall changes over time, too; there’s sometimes a heavy high-pitched buzz that carries along with the static, and towards the end of the piece an even thicker bass staccato and hammering becomes apparent.

“Tsuchigumo” is an interesting track, because it really has no thickness from any bass rhythm. Instead, it stands on a very metallic-like whirring, along with faint traces of pounding in the background. What’s prevalent in this track is the oscillation of the whirring tones, which sometimes create a bell-like resonance in places. It’s all much like being in a factory fed through a high-pass filter, only keeping the higher frequencies. It’s an interesting take on the harsh noise wall, and although I do find the bassy, crunchy textures to be more fulfilling, this one is droning in nature and works just as well.

Yokai is an excellent release with two very different textures. The walls remain stoic, but there are some great changes on these lengthy tracks to warrant many multiple listens. Crucifix Eye is doing some uncharted things on Yokai, and it’s a cassette to check out.